The Superstition Challenge was an interactive exhibition created by Mario Di Maggio based on the Superstition Bash by the Committee for Skeptical Inquiry (CSI).

At both venues the Superstition Challenge proved extremely popular and resulted in the biggest media event for the science centre and museum, second only to their opening.

The exhibition challenged visitors to boldly ignore deeply held superstitions about bad luck. It encouraged participants to walk under a ladder, smash a mirror, open an umbrella indoors, step on a pavement crack, etc.
Accompanying the interactive exhibition was a planetarium show explaining how astrology differs from astronomy; and a live science show about luck, scepticism and rational thinking. The coffee shop even served 'misfortune' cookies.

Below are the in-house publicity posters from the two venues, with more detailed information available here:
Glasgow Science Centre media and publicity

Personal thoughts about the Superstition Challenge 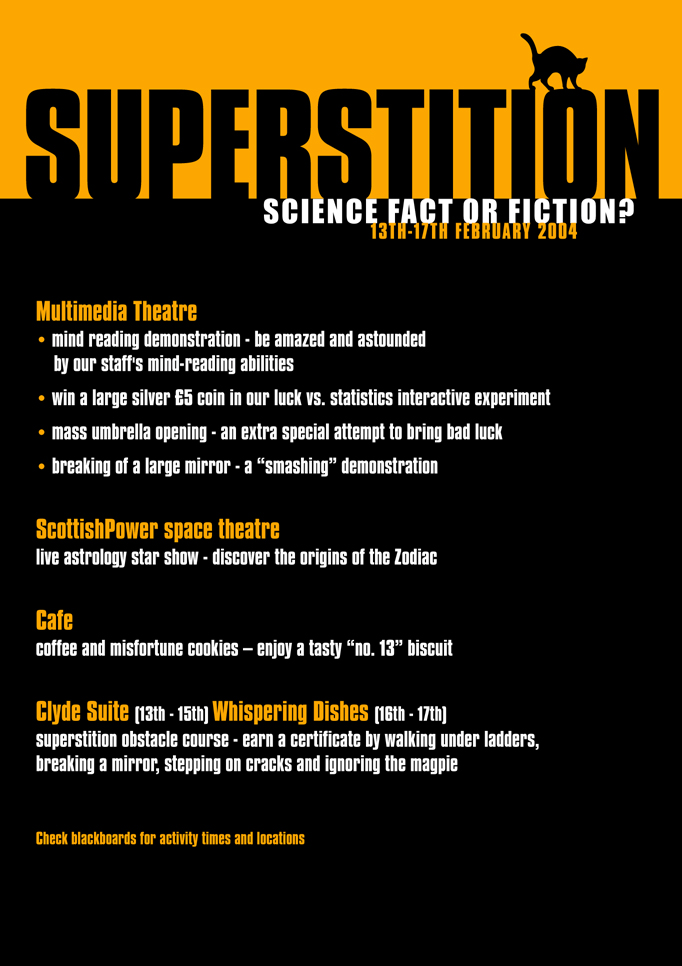 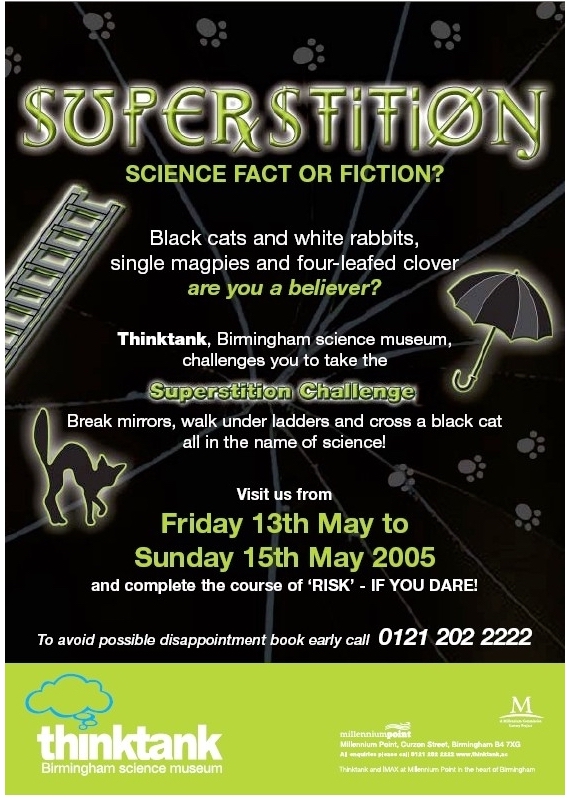 Below is a post I submitted to various mailing lists after the first Superstition Challenge in February 2004; which prompted a number of science centres and museums around the world to run their own event in August 2004.

I've always wanted to do this. I first heard of such a 'Superstition Bash' in 1997, put on by CSICOP (Committee for the Scientific Investigation of Claims of the Paranormal) in the USA. The idea has caught on with similar groups around the world - not only because it's an entertaining way of poking fun at superstitions, but also because it provides the media with a great story for Friday 13th!

Happily, that's exactly what happened in Scotland over the February mid-term schools break. Our superstition event received extensive coverage on national morning television, Scottish TV news, BBC Radio Scotland and Clyde 1, as well as several newspapers. My marketing colleagues have described it as the largest media event for us second only to the science centre's opening three years ago. What's more, we're apparently the first science centre in the world to host such an event.

Photos of the event are available here:  http://superstition.dimaggio.org

I'm just delighted to have promoted sceptical thinking (something sorely needed today) with thousands of our visitors over five busy days. We tried to accomplish this in six ways:

(a) Superstition Challenge - a trail consisting of 13 superstitions that supposedly bring bad luck if disregarded. Visitors were encouraged to deliberately ignore them or do the exact opposite (eg. smash a small mirror; walk under a ladder; mix red & white flowers; ignore a single magpie; open an umbrella, etc). They received a certificate to celebrate their courage, and were asked to leave feedback.

(b) "Do You Feel Lucky?" science show - an entertaining live performance dealing with Dr Richard Wiseman's four principles of luck. Activities included a member of the audience winning a £5 coin; a powerful 'psychic' feat demonstrated (and revealed to be a trick, without the explanation); a large mirror smashed with a sledgehammer; and a mass umbrella opening - all in an attempt to invoke copious 'bad luck'.

(c) "What's Your Sign?" - live planetarium show about astrology. How did astrology originate? How accurate is the concept after 3500 years? What will happen to astrology when we colonise other planets? Included is a fun astrology horoscope with 13 signs.

(d) Fascinating Facts (taken from Richard Wiseman's research) - for visitors to read while queuing at the ticket desk eg. did you know that Scotland is the most superstitious country in Britain (46% of the population) - compared with England (42%), Wales (41%) and Northern Ireland (40%)?

(e) "Mystery Investigators" handout (www.mysteryinvestigators.com) - available throughout, and included articles about "13"; the Loch Ness Monster; astrology; as well as an Origami star activity.

(f) Coffee & 'misfortune' cookie special - in our restaurant, with biscuits in the shape of number 13.

Over the five days the science centre received approximately 1200 visitors per day – and at least 60% attempted the Superstition Challenge (unfortunately we only had 540 small mirrors for smashing, and had to limit these to one per family). In total around 500 people attended the science show and about 200 the planetarium show.

We ended up enjoying the greatest success with this event, even though we tried to call down all the bad luck in the world! I believe this topic is popular because it is a very human story, all about our deepest fears and private thoughts. The reactions of visitors were fascinating to watch - some thought we were totally mad, while others were delighted to publicly demonstrate their disregard for superstitions. We saw more than one spat between disagreeing partners! And it was something refreshingly different for our staff, who particularly enjoyed the media attention, on-the-spot radio interviews, etc

Why don't you try it? 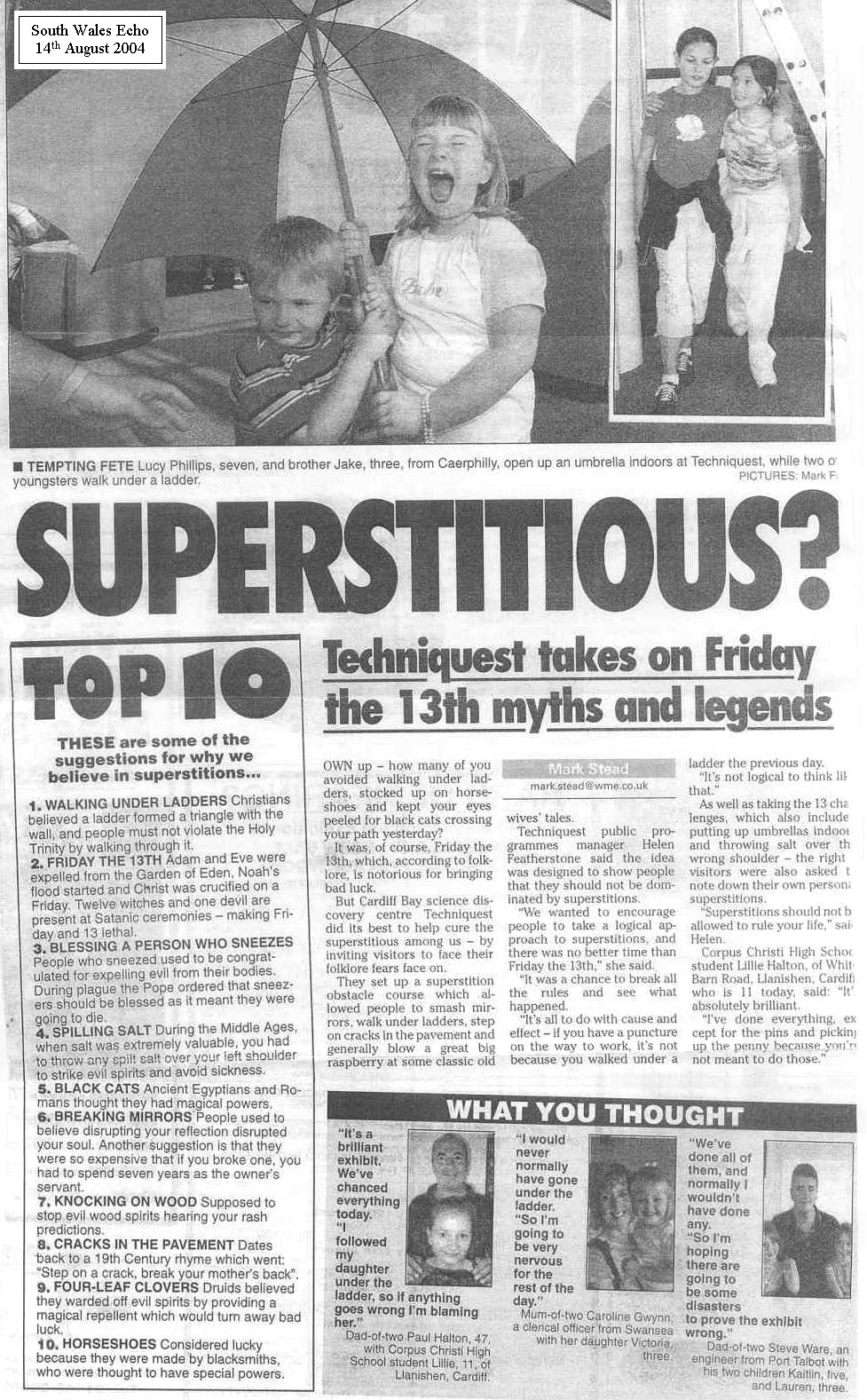 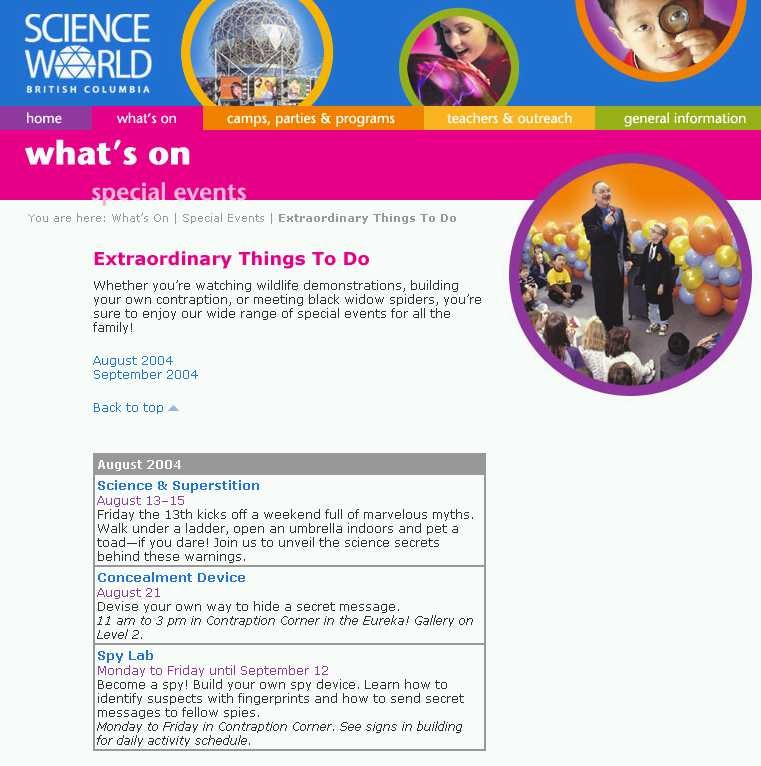