"A man is accepted into a church for what he believes, and he is turned out for what he knows” - Mark Twain

“Life is too short to be little. Man is never so manly as when he feels deeply, acts boldly, and expresses himself with frankness and with fervour” - Benjamin Disraeli


Of my own accord I became intensely interested in religion in 1983 during my second-last year in secondary school. Two of my classmates happened to be Jehovah's Witnesses, and I soon realised they were the only Christian group that took study of the Bible seriously. Being academically inclined, I was drawn to this scholarly approach.

I made rapid progress and before long I was out preaching in public. I was baptised in 1985, appointed a ministerial servant in 1987 (aged only 21), refused military service on conscientious grounds in 1989 (served a 3-year Community Service sentence) and was appointed an elder in 1993 (aged only 26).

I was as happy as I knew how during my time with Jehovah's Witnesses, and made many positive changes in my life. One thing that remained unchanged though, was my sense of curiosity. After all, it was my curiosity and desire to understand things deeply that had brought me to serious Christianity in the first place.

I never stopped questioning things that didn't make sense to me.

The things that didn't make sense to me as a Christian did not concern the Scriptures (which by their very nature are vague and open to a dozen interpretations), but had to do with science and the natural world. I noticed that many aspects of the real world (eg. fossils, animal characteristics, geology, etc) somehow did not match up with the Bible's version of the world. I therefore gradually accumulated many questions - and when dealing with hard evidence and fact, it is reasonable to expect straight answers.

So between 1992 and 1998 I engaged in correspondence over a few such matters with the Governing Body of Jehovah's Witnesses in Brooklyn, New York.

I directed my questions straight to the top from the word go, as the 12 men who make up the Governing Body are the only 12 Jehovah's Witnesses on the planet allowed to think for themselves. All other Jehovah's Witnesses, including the committee members of the international branches, will refer any dilemma back to information published by these men, as if no other knowledge exists.

Being young, naive and enthusiastic about my religion, I sincerely believed they would take my carefully-researched and respectfully-worded letters seriously (OK my final correspondence may have been somewhat ‘disrespectful’ in tone ... but by then I was sick and tired of being dismissed as an idiot). Unfortunately (although now I would say 'fortunately') they did not take my letters seriously and their unconvincing and watery replies made me progressively more suspicious.

I have reproduced my five correspondences with the Governing Body in full below. Note how my first two letters received a reply from Brooklyn, whereas the last three were re-routed to the local branch office in South Africa.

In August 1998 I disassociated myself from Jehovah's Witnesses.

For 16 years I had been totally sincere and had played by the rules - and all I asked in return was to have a few questions answered honestly and directly. Instead, I discovered that despite all the noise they make about "truth", the 12 members of the Governing Body of Jehovah's Witnesses are no different from all other religious leaders [or people in general in fact] ie. they have a fixed world-view and they will do anything (even resort to dishonesty) to ensure the so-called 'facts' fit their particular world view.

Clearly the truth concerning the real world and the actual Universe we live in is not important to them.

Literally overnight, I lost around 400 so-called friends and acquaintances. Individuals who for many years had been close to me suddenly refused to look at me in the street. People started to pretend I didn't exist (like the evidence for biological evolution). It was a very painful experience at the time, but ultimately very amusing.

Through all this I learned that true understanding can only come from a completely honest and unbiased investigation of the real world ie. a rigorous interrogation of Nature, with a fearless resolve to accept whatever answers she provides. This exciting adventure is called Science.

I’ve made my historical correspondence with The Watchtower Society available here as a reference - but also as an indictment - because by evading my sincere questions and treating me like an idiot, they turned away a ‘true believer’. Lucky for them there is no god - because if there was, they would have a lot to answer for.

I guess it was only a matter of time before I spoke out against the inaccuracies contained in the Creation book. I had always known there were things wrong with this book (published in 1985), yet only in 1996 did I came across hard evidence with endless examples of errors. I felt betrayed, hurt and of course infuriated.

Just so they wouldn't miss the point, I purchased a new copy of the book and filled it with a paragraph by paragraph commentary on the exact whereabouts and nature of many of the errors. You can see this analysis in full here.

Below is the cover letter I included with the book (written on the letterhead of the science museum I worked at), followed by their response down below. Their insipid reply did not of course come from Brooklyn, but again from the local South African branch.

Nevertheless, exasperated by their meaningless response, I once more forwarded the evasive reply to Brooklyn, accompanied by a short letter. Then - a year later - I received a somewhat irked response from the South African branch; which, for the sake of my mental health, I immediately annotated in red - and you can see it below too. 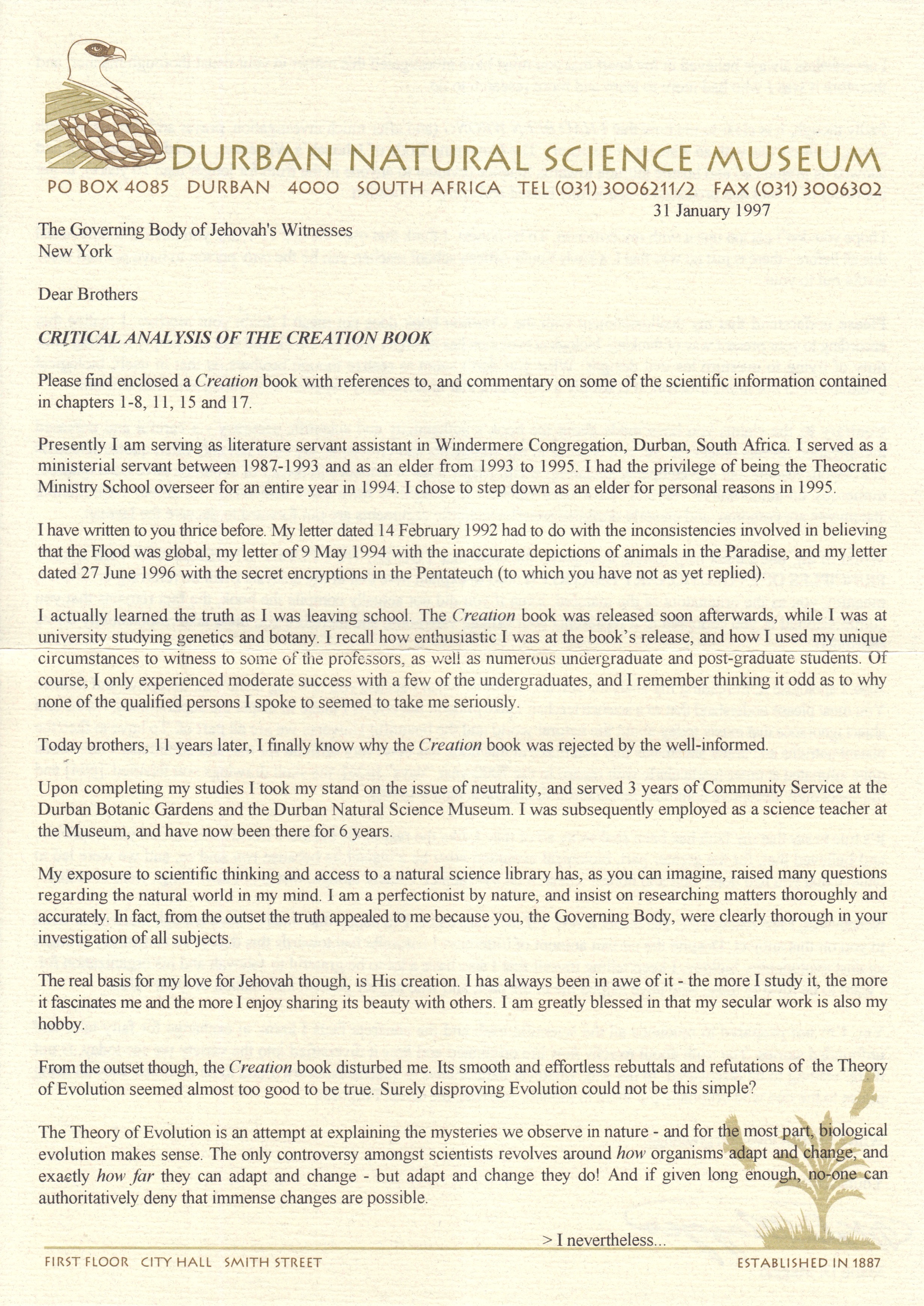 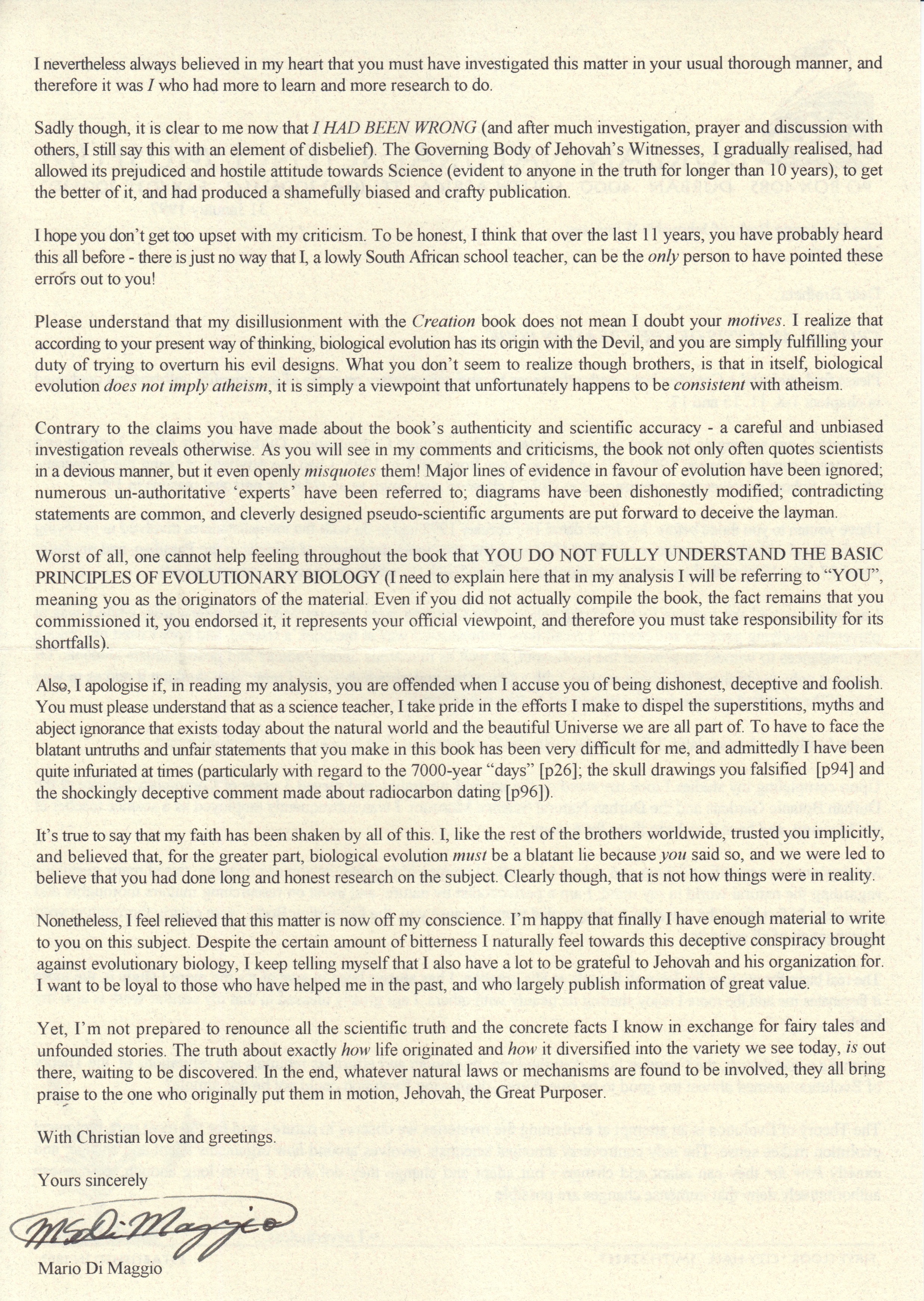 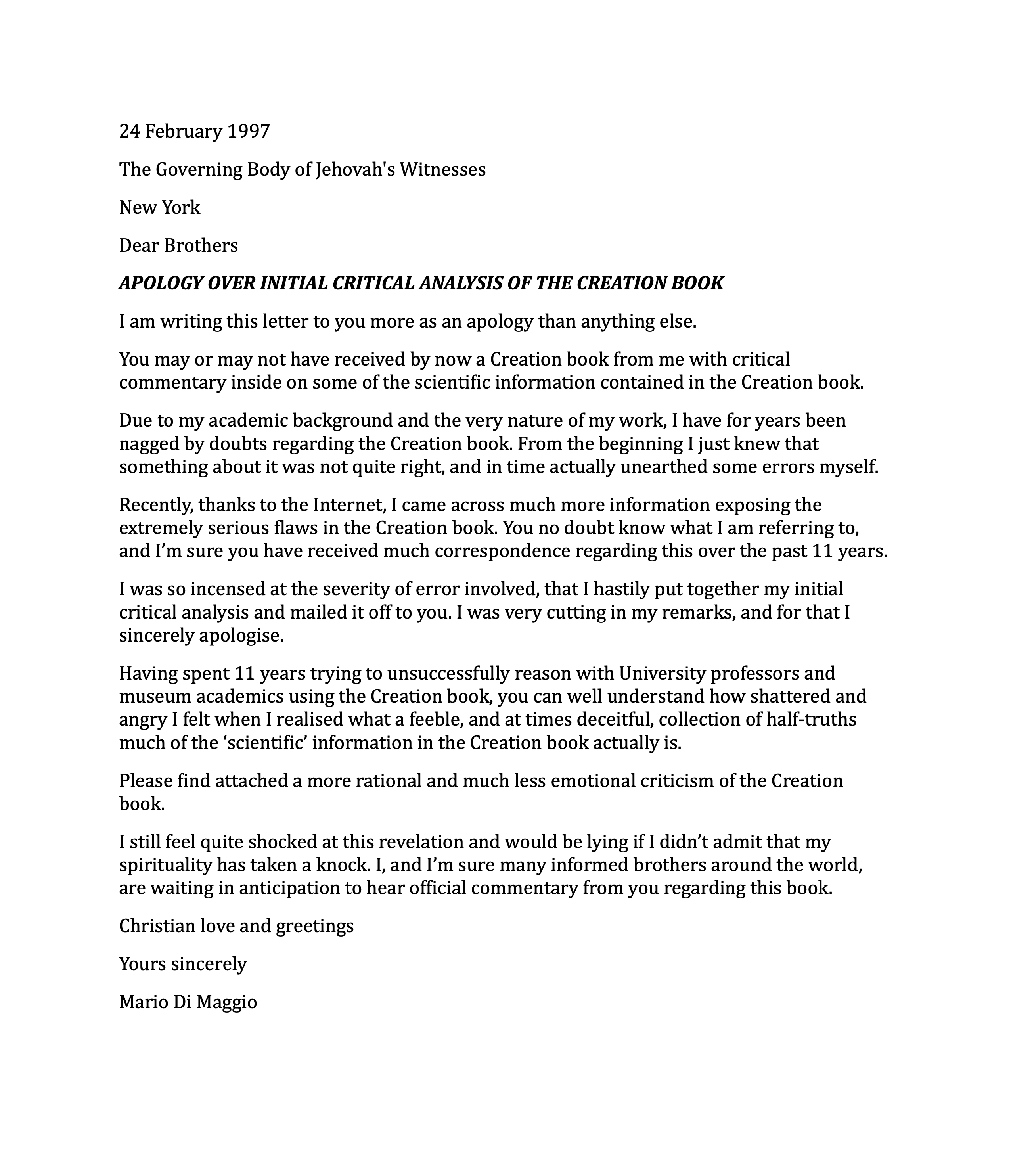 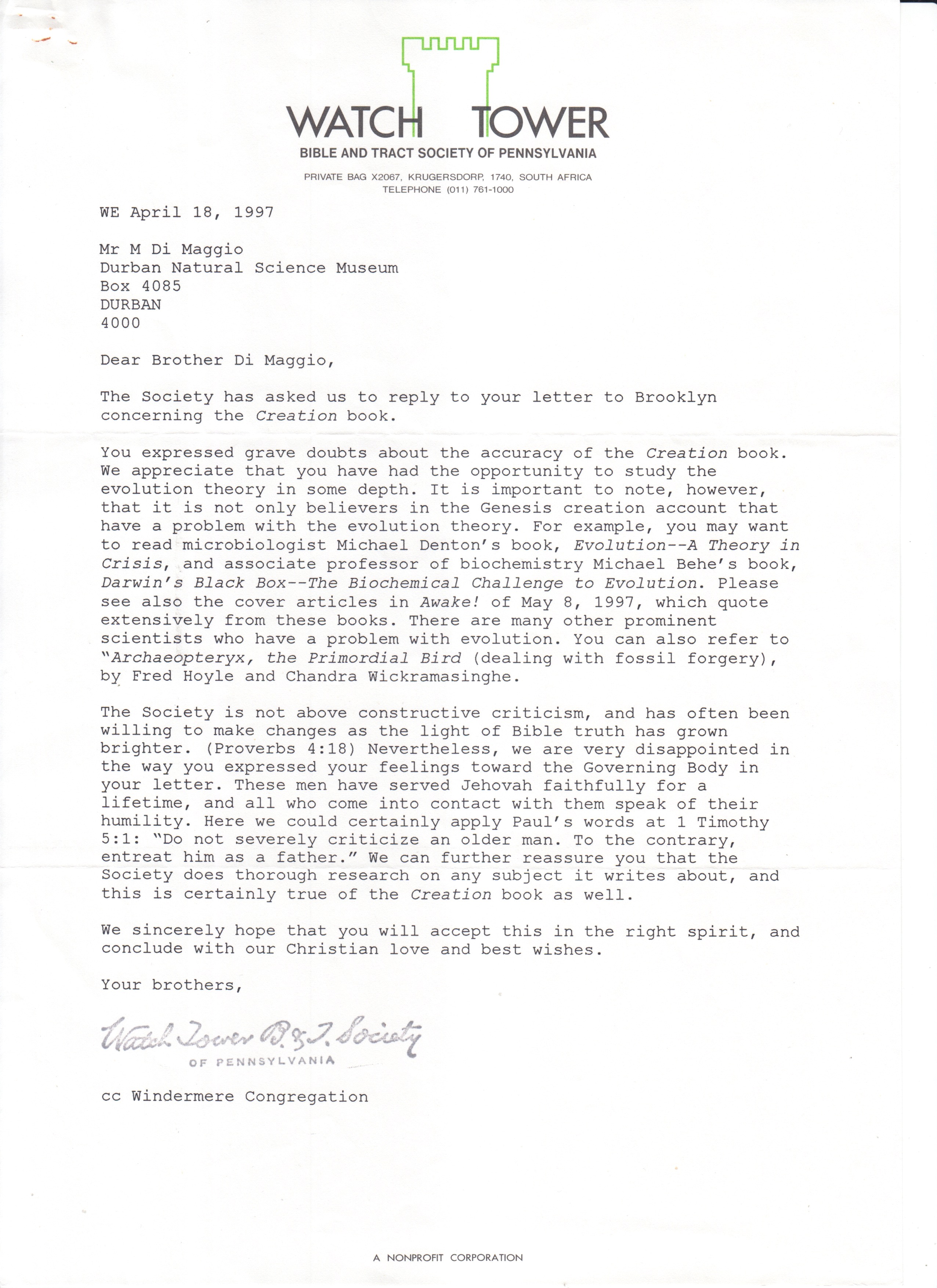 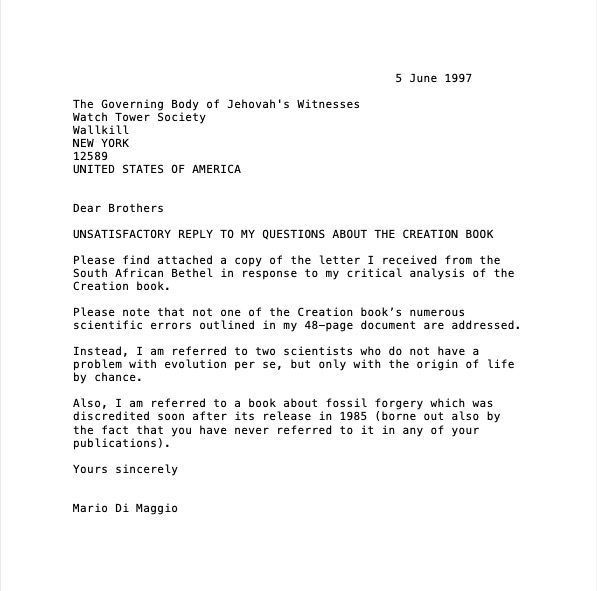 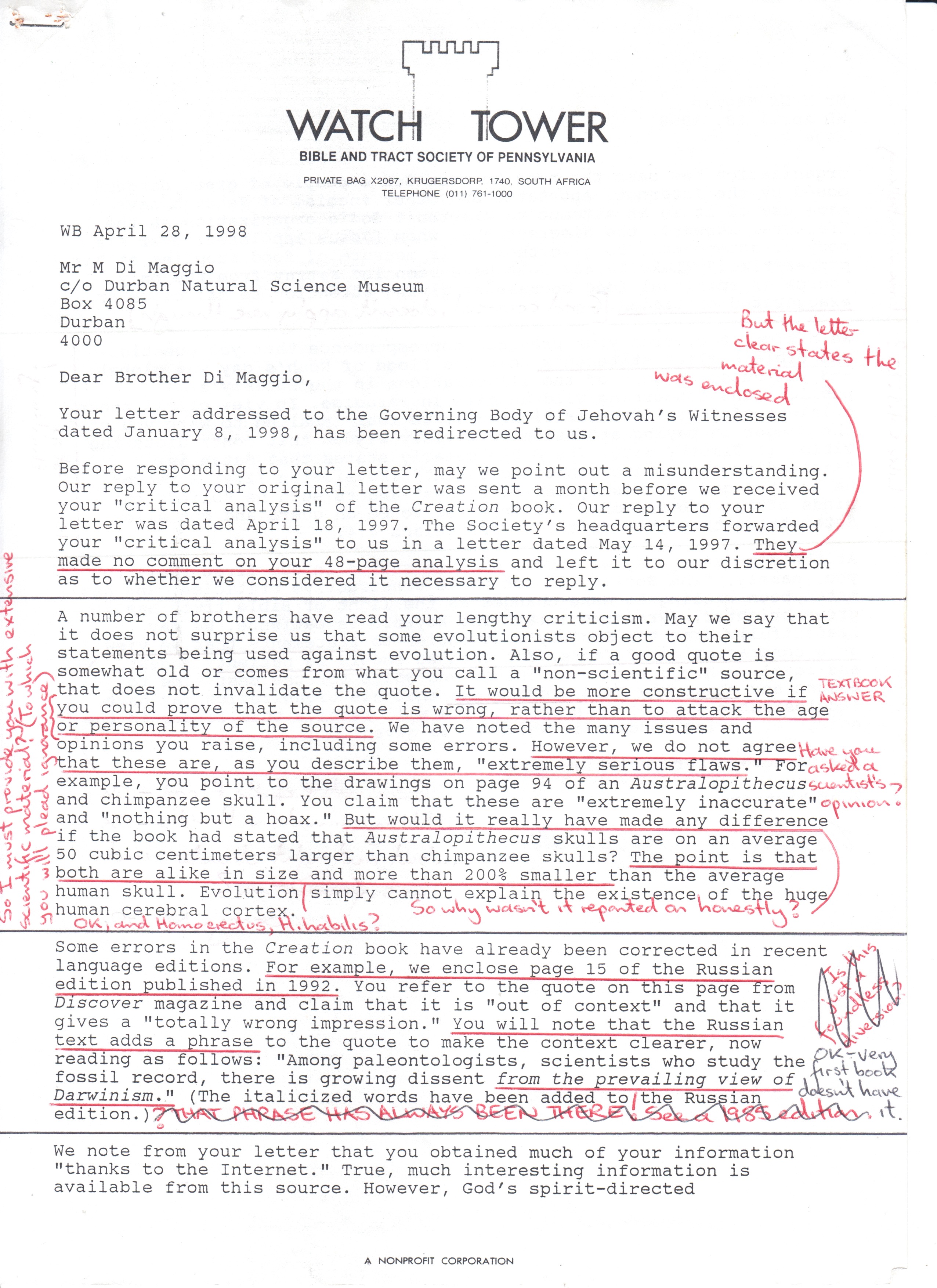 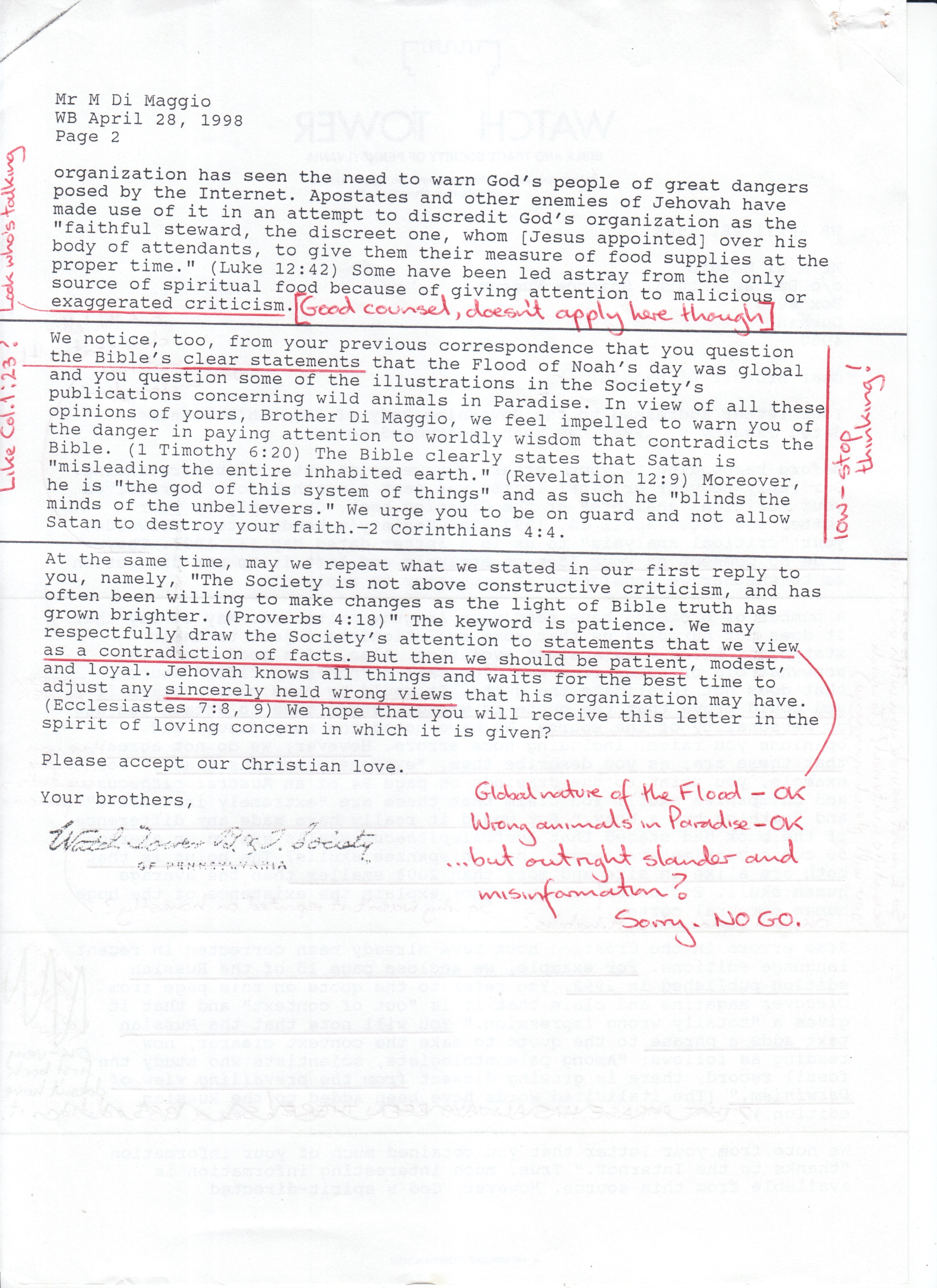 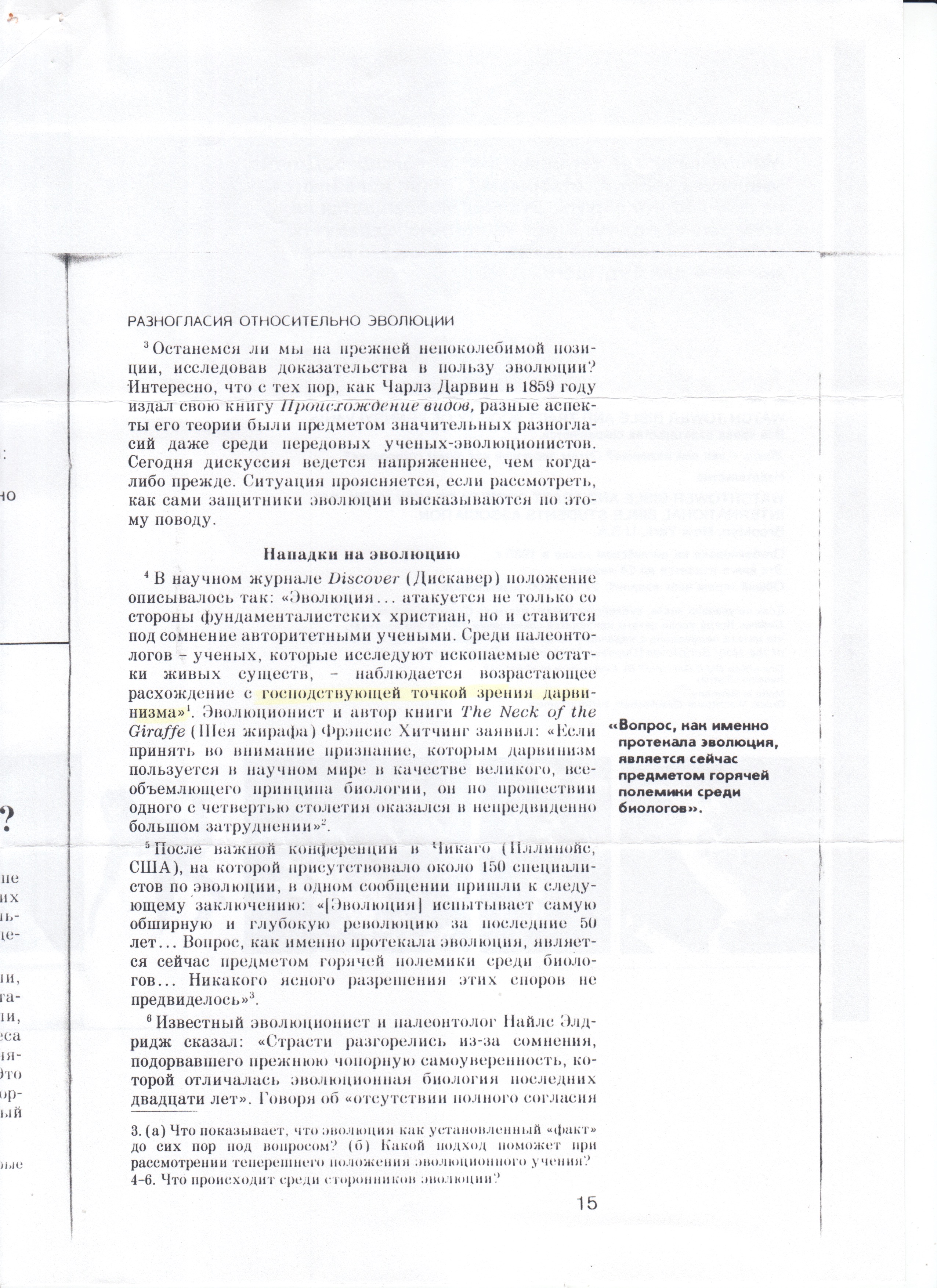 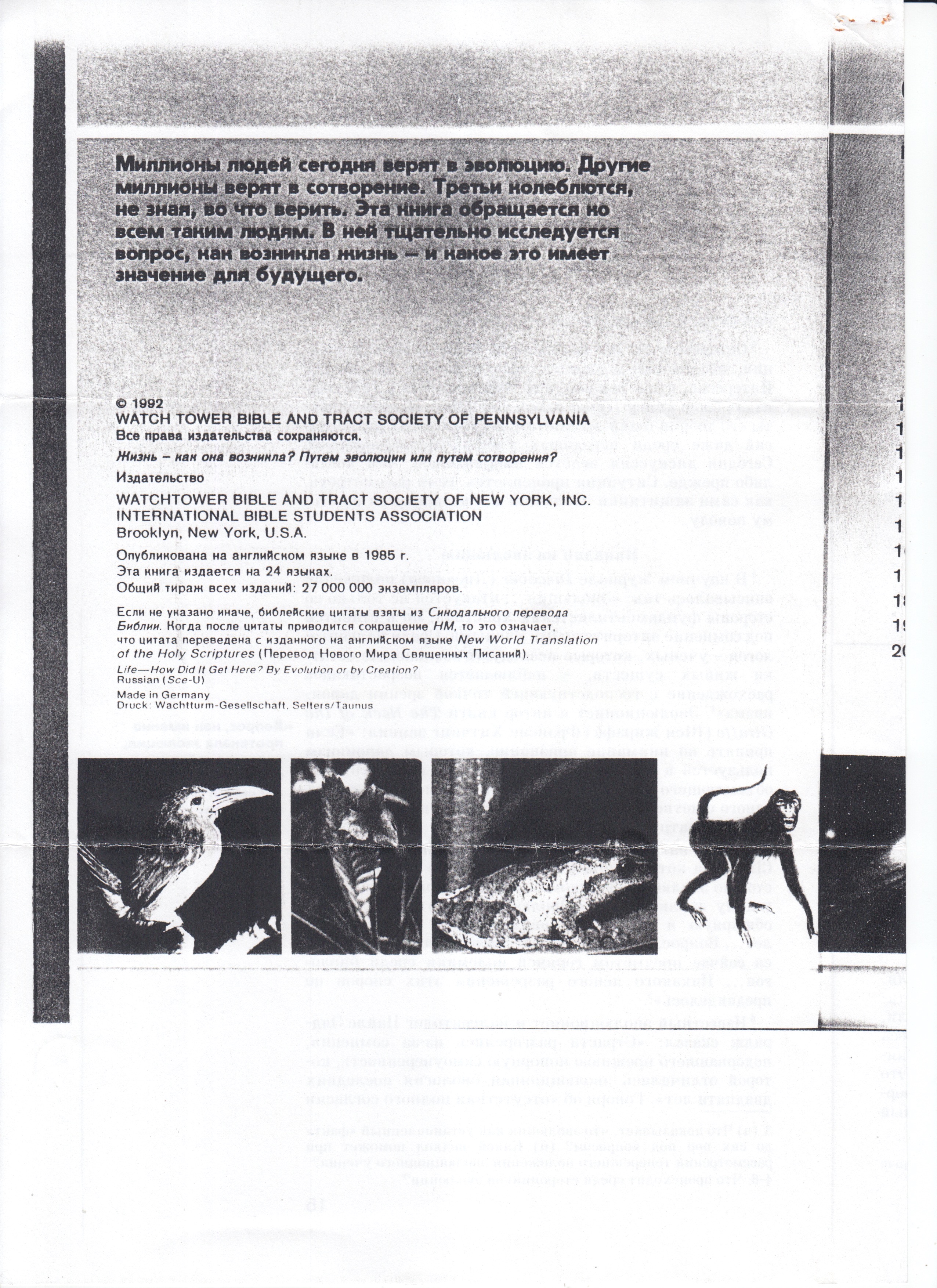 On accidentally learning about certain encryptions in the Hebrew text of the Pentateuch (which everyone seems to know about except Jehovah's Witnesses), I felt impelled to write a third letter and enquire why we as serious Bible students were never told of these intriguing inclusions. My letter, with the enclosed reference, appears below, followed by the reply I received.

I was so surprised by the reply (not only was it not from Brooklyn, but it deliberately avoided acknowledging the encryptions), that I immediately forwarded it to the Governing Body, together with a second letter expressing my dismay. My second letter also appears below - yet as you can probably guess, I never received a reply from New York on this matter. 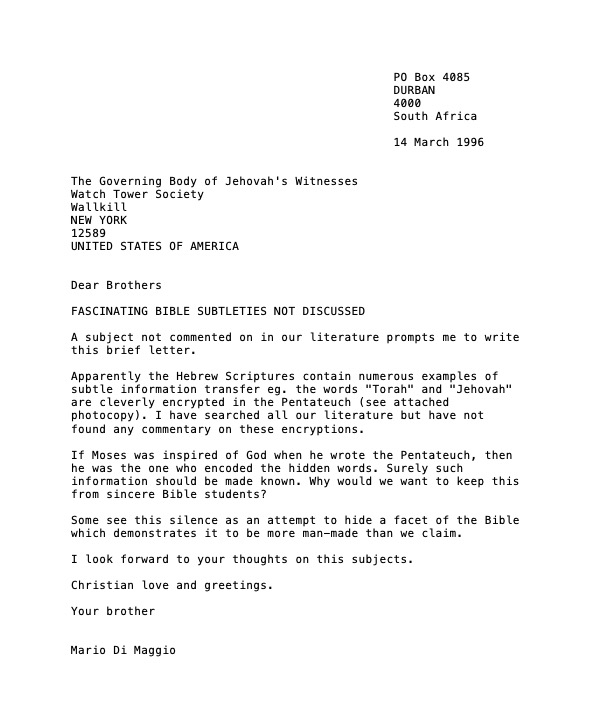 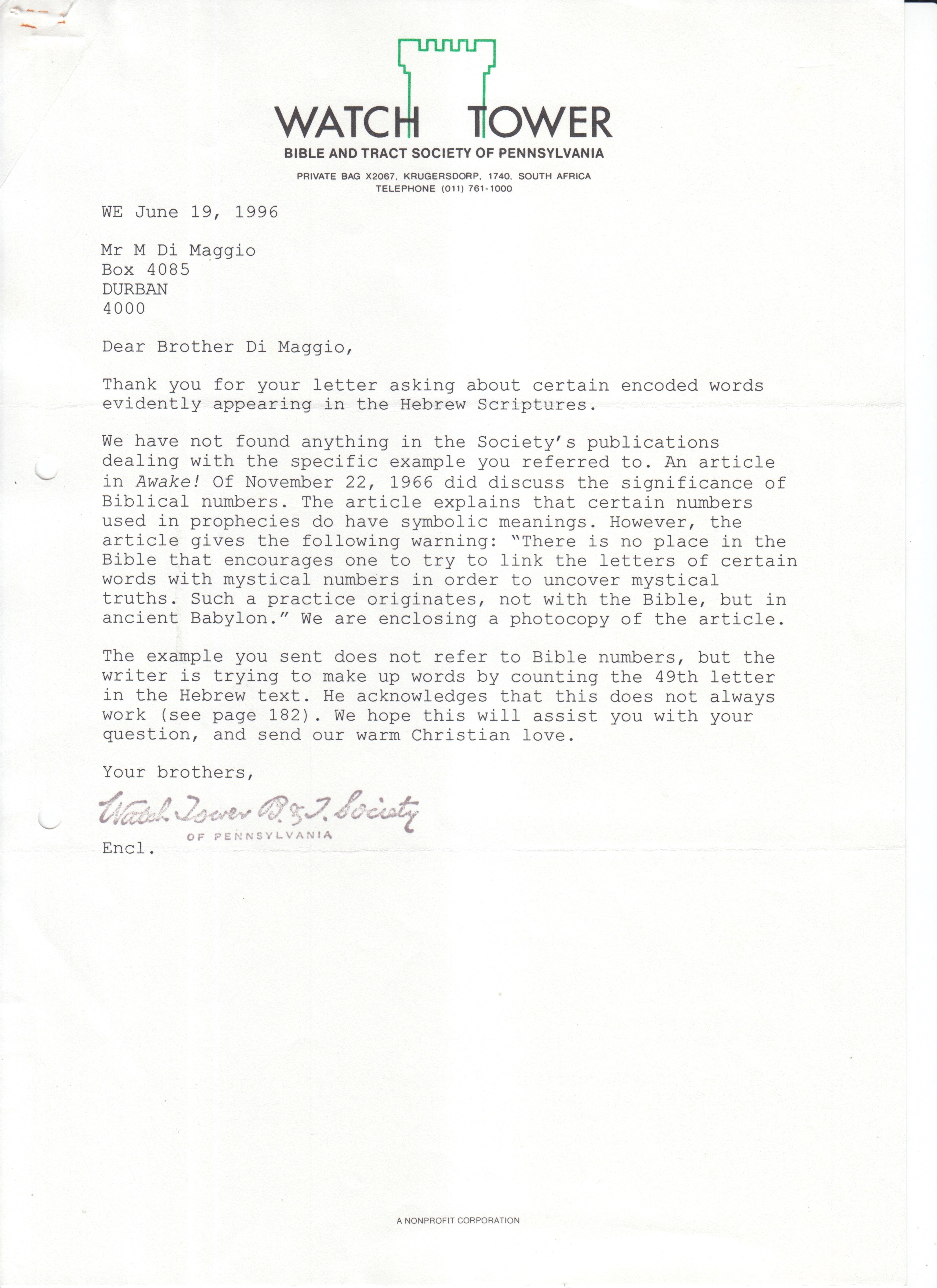 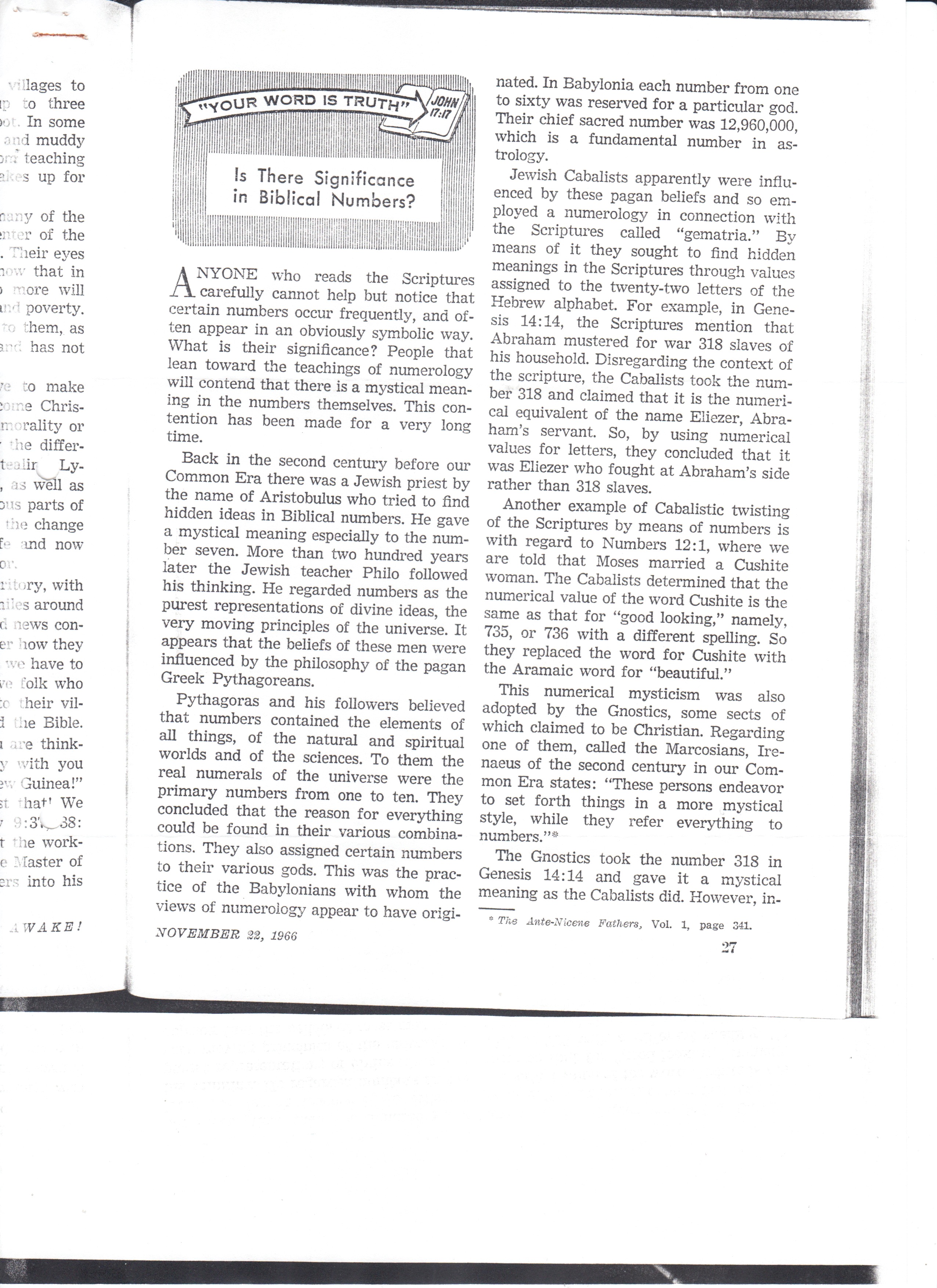 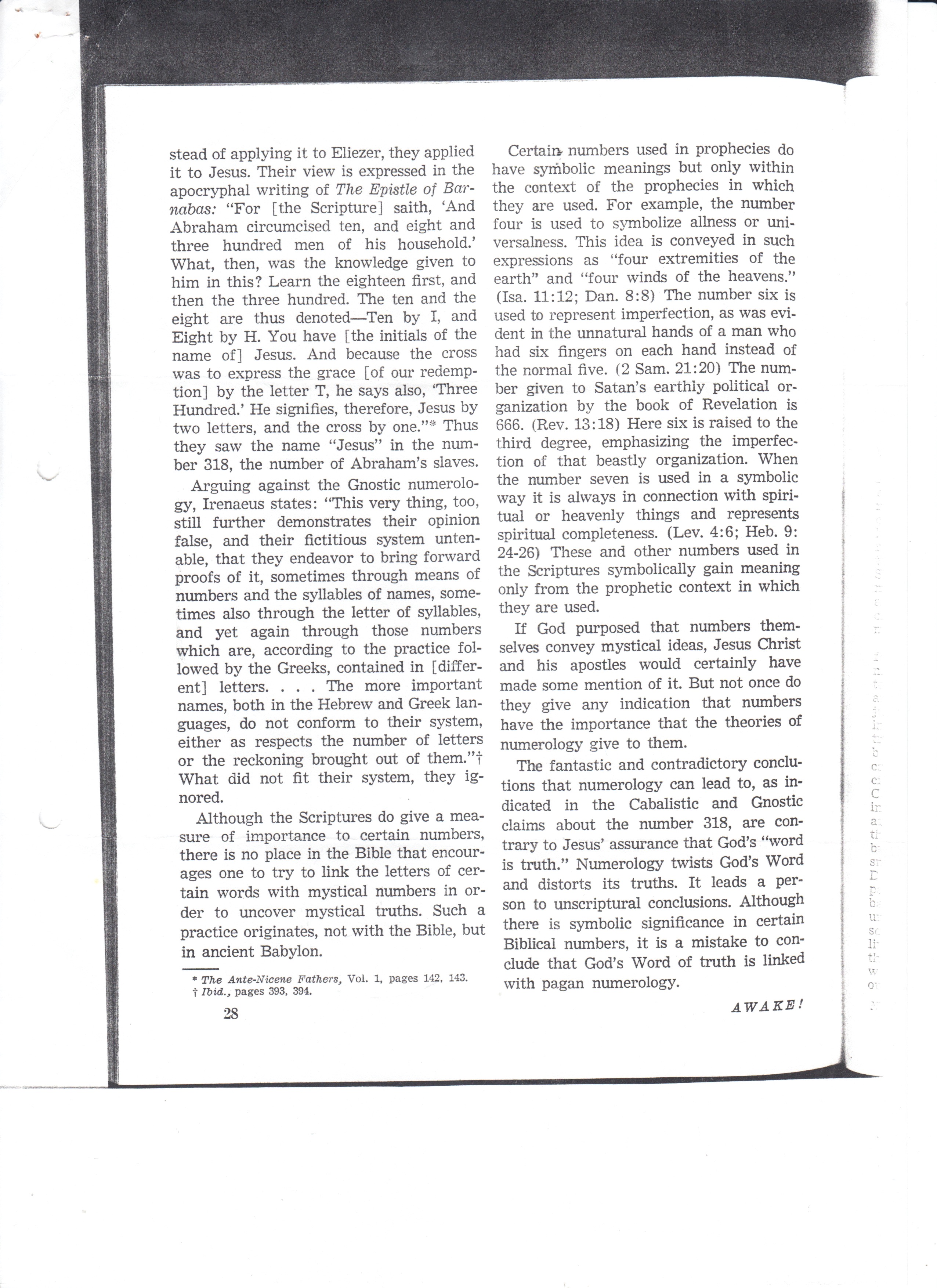 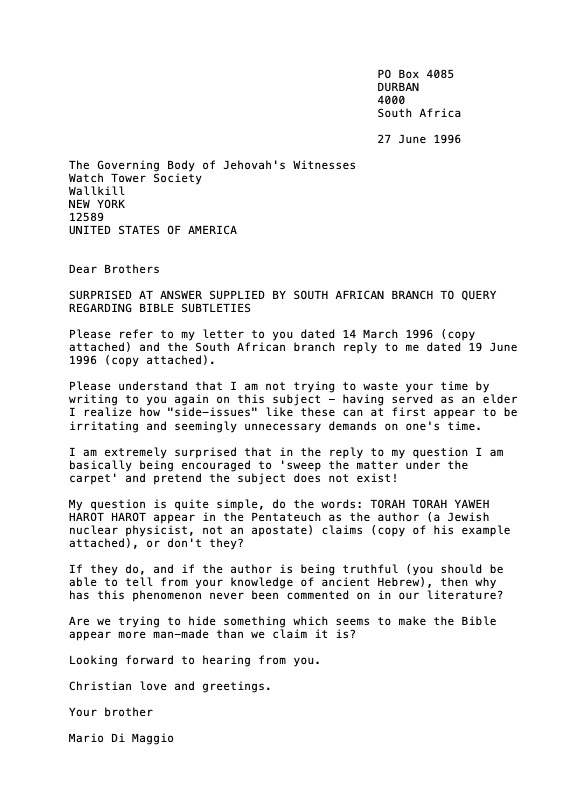 I wrote my second letter to the Governing Body of Jehovah's Witnesses simply to point out the basic biological errors contained in a number of their full-colour illustrations of Paradise, and how such errors made it difficult for me to preach to my scientific colleagues. My letter is below, followed by their responses (oddly they replied twice, both times including the same reference). 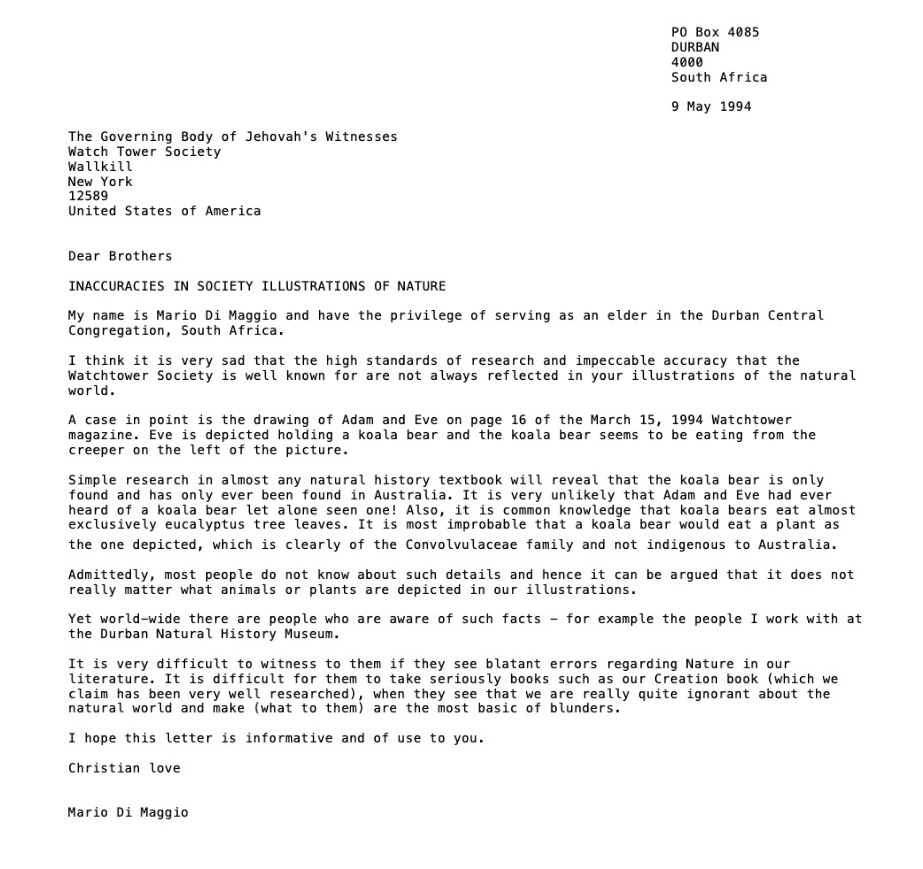 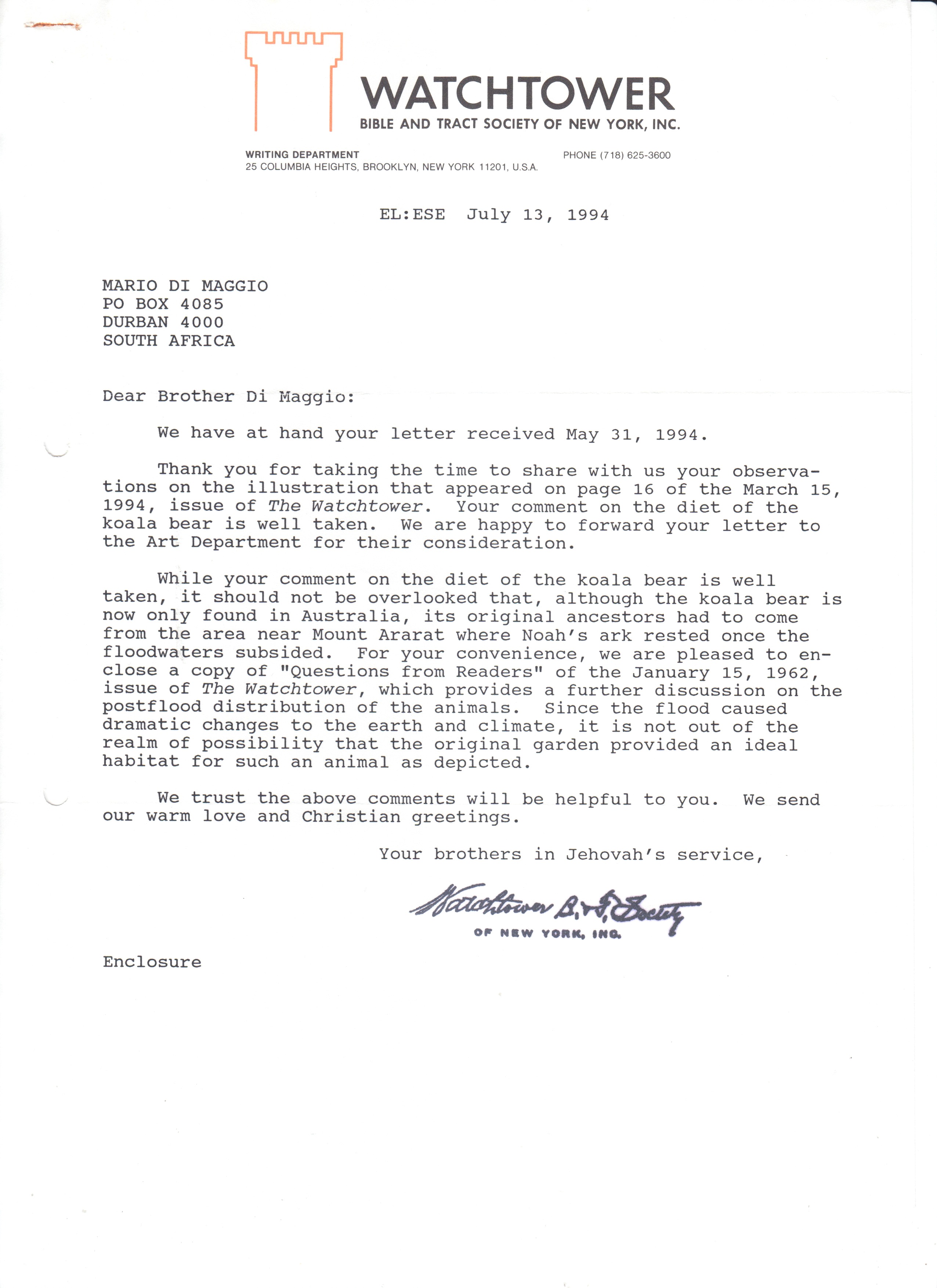 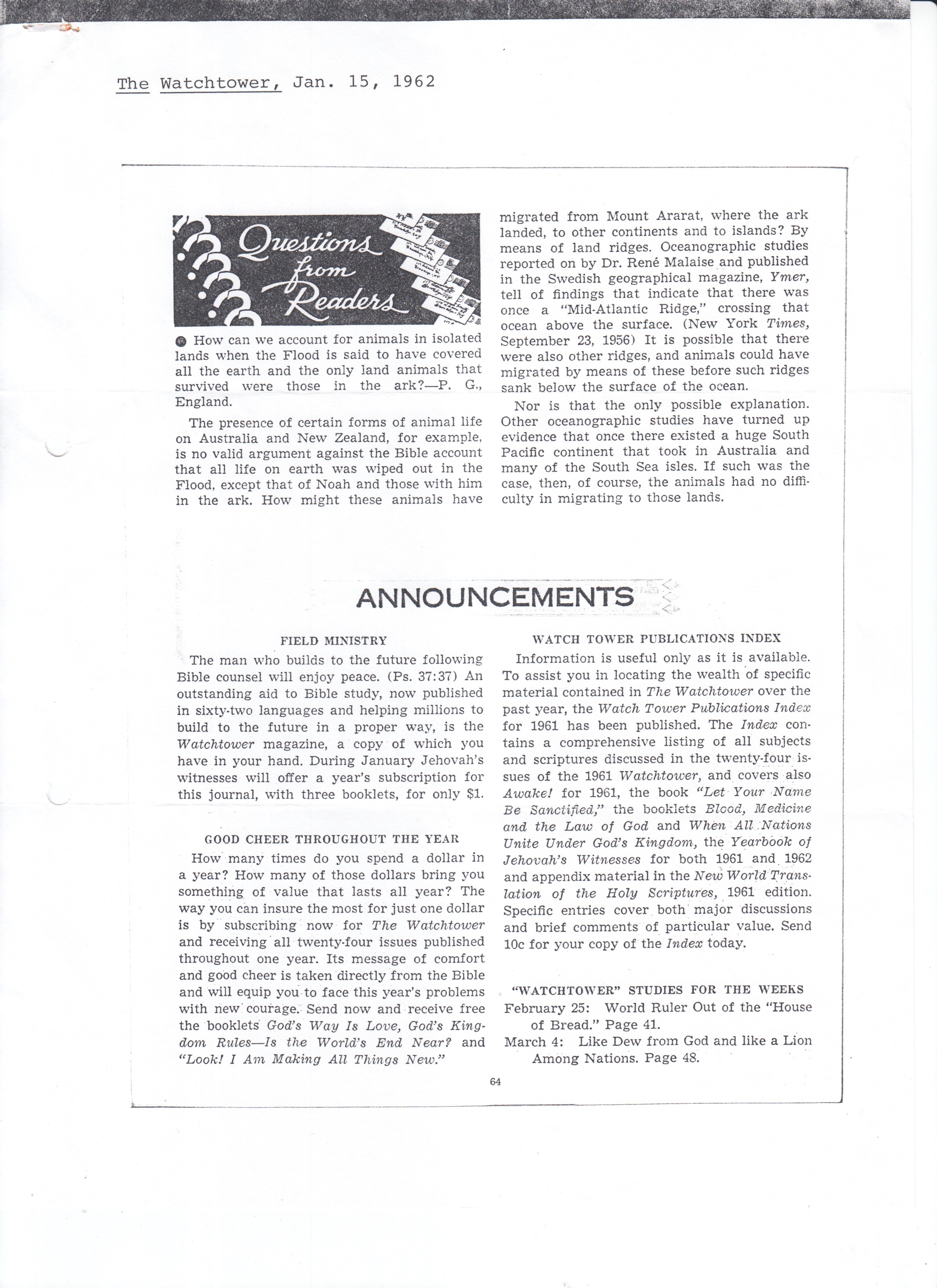 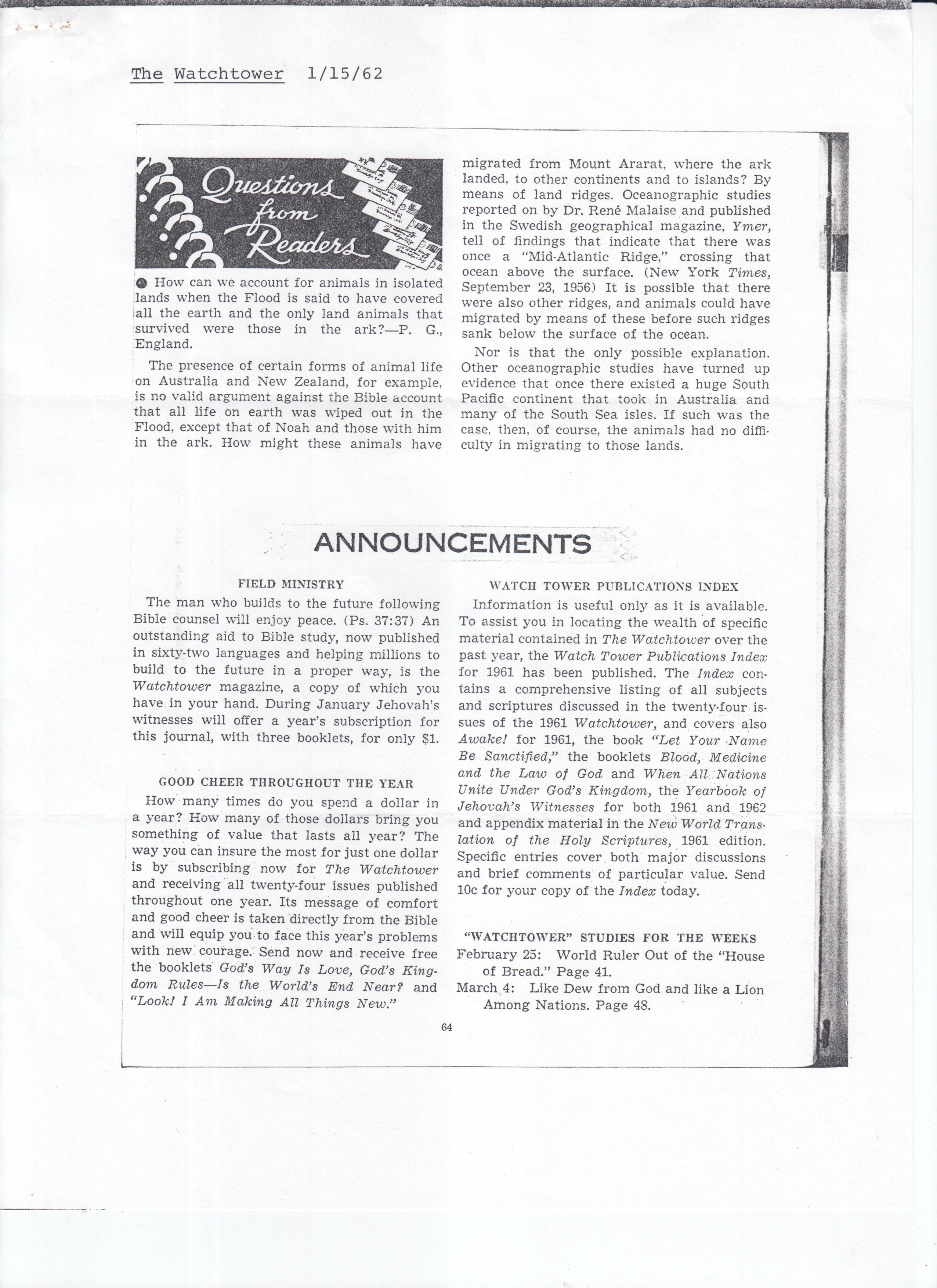 My first letter to the Governing Body of Jehovah's Witnesses had to do with the so-called flood of Noah's day, inquiring as to why we believed it to be global and not local. My letter below, followed by their response. 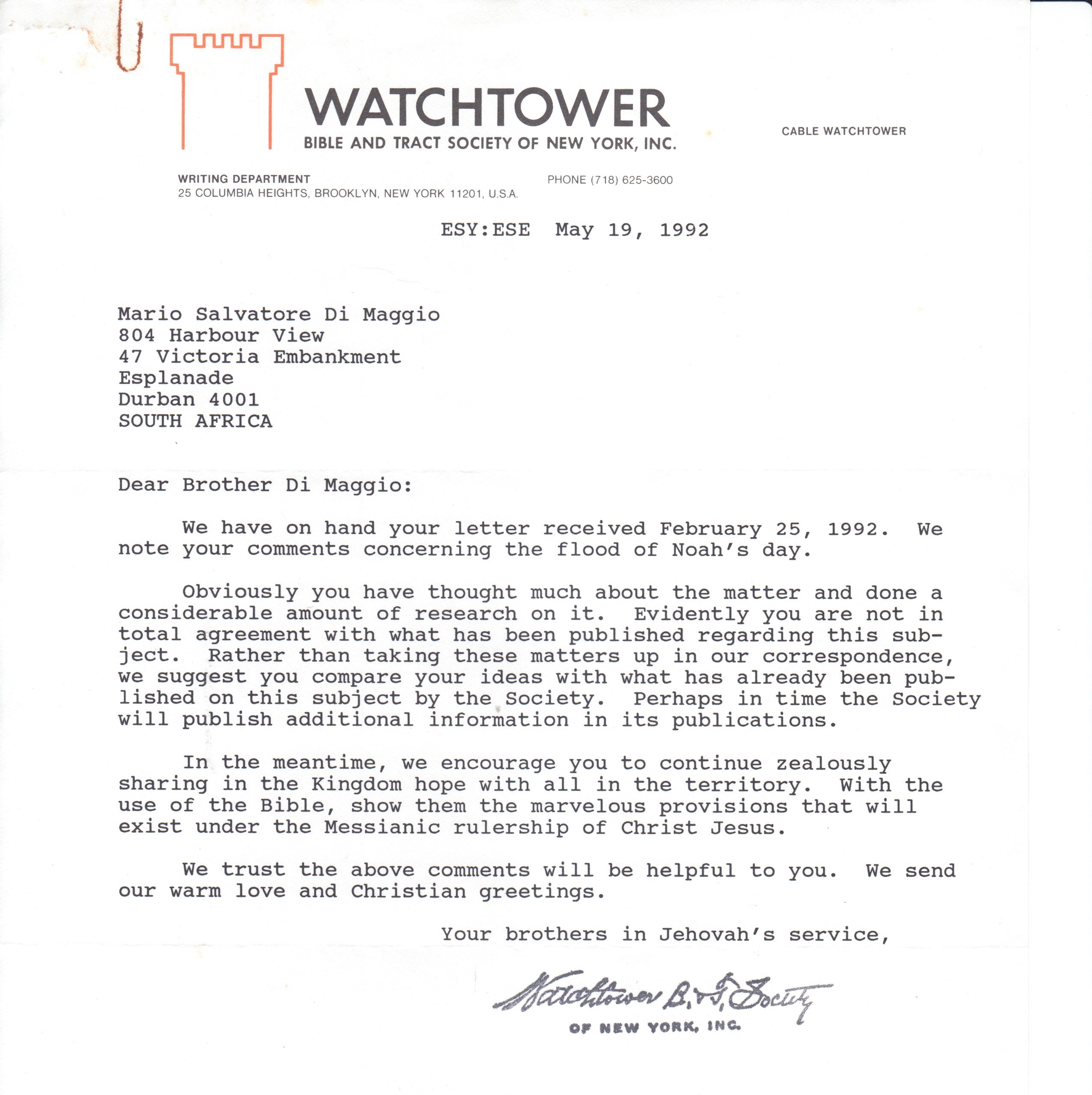 My first letter and their reply have also been translated into French (PDF here) and Portuguese.